In no particular order...

What's with the free books? Why don't you sell them? Are you stupid?

Last question first, no. In answer to the other two, I used to sell my textbooks. Not any more. In my opinion, the textbook industry is just short of a scam. The only thing worse are the used text book resellers who help to raise the cost of new text books. I think at one time, text book publishers were a valuable resource (although not without faults), but given the advent of the Internet, I feel that they are no longer all that useful. One of my main issues with publishers is that authors are treated as little more than mercenaries. Normally, the author loses all rights to their work. I never had any control over such things as whether or not subsequent editions would be published. In fact, a common part of a contract is that the author will not create "competing works", that is, other texts that cover the same material, even as a contributing author. Although you do receive royalties, a typical contract will fetch somewhere around 10% to 12% of wholesale (what the bookstore pays, not what the student pays) which might be only 60% of retail. For example, a $200 text may be $120 wholesale, you which you get 10%, or $12. This is not a recipe for riches unless you wind up with a very popular book that is widely used (like maybe a general physics, biology or math text), but that's the exception, not the rule. Granted, you do get to work with a team of people such an illustrator, a copy editor, a layout editor, etc., so you don't have to do these things yourself, but for this, you lose almost all of your control (and all of your rights) as the author.

What makes this worse is the national book resellers. These pariahs like to position themselves as helping students by making lower cost used texts available at a reduced price. The reality is that they have the opposite effect. Like all middle-men, they must extract their ounce of silver, and do little for it. Here's how it works. Let's take that $200 text referred to previously. The reseller comes onto campus and buys up texts from students at a steep discount. After all, they have to offer the bookstore the used text for substantially less than the wholesale price of a new text. In this example, that would be much, much less than $120 so that the bookstore can offer the used text at a decent discount (after all, who would bother with a used text if it was only 10% less than new?). Of course, the reseller needs to cover their costs and make a nice profit, so the student who resells their text is the one getting the shaft as they will receive only a fraction of what the text is worth. To make matters worse, every used book is a book that isn't sold by the publisher, so the publisher has to cover their costs and make their profit on fewer sales. Because much of the production costs are fixed, this raises the price of the book. If this were to go unchecked, eventually, the publisher and author would make zero dollars (if you think the reseller has any legal requirement to pay the publisher or author for a resale of a used book, I have some prime ocean front property in Colorado I'd like to sell you). To stem this tide, the publisher will produce what I like to call "waste" editions. These are new editions that contain very few changes, sometimes just the reordering of some chapters, but, as professors tend to specify the latest edition of a text, this effectively cuts off the used book flow from the prior edition(s). The production costs of these waste editions are not free, and they contribute to an increase in text book prices. In a 20 year period, the basic electrical circuits text that I use in one of my classes went from the 7th edition edition to the 13th. The content is virtually unchanged, which is to be expected as the basic theory is unchanged (it does, however, exhibit an increase in "eye candy" and tangential material). That's a new edition every three years on a subject which has seen little fundamental change. Has Ohm's Law changed? What about RC circuit transient response? Maybe Thevenin's theorem? No, no and no.

What to do? Now that the personal computer and the Internet have made it easy to create and distribute creative works, I feel that the traditional publishing route can be circumvented. There is a growing trend called OER (Open Educational Resources) where authors share works, often with a Creative Commons license (you can keep some or all of the rights). There are no royalty checks with this scheme but it is possible to get educational institutions to underwrite or support the production of these works, perhaps through stipends, grants, sabbaticals and the like. As an author, the most important aspect to me is that I maintain full control over the work. If I want to issue a new edition, nothing is stopping me. There are also the positive feelings of contributing to your field, helping colleagues, and generally making education a little less expensive for the students. So although you don't get royalties, you do get dividends.


What is the capital of Assyria?

This is a trick question. It turns out that there were different capitals at different times. Also, there is no evidence that swallows flew through this area whilst carrying coconuts.


What's the difference between a xylophone, a vibraphone and a marimba?

First off, these are all referred to as keyboard or tuned percussion. The pitch layout of all three is like a piano although, unlike a piano, the bars are larger on the bass end (left side of player). Xylophones and marimbas both use wooden bars (preferably rosewood) and vibraphones (or vibes) use metal bars. Vibraphones also have a damper pedal because the bars have a long ring time. The damper is common to both the "white" and "black" keys, so the bars are set at the same level giving the vibes a flat top. In contrast, the xylo and marimba raise the accidentals (black keys) a little higher to facilitate access. They don't have a damper. Vibes also have a motor which is attached to a series of vanes located inside of the resonators (the metal pipes that hang down below the bars). This creates a tremolo effect. The tremolo speed can be varied or turned off completely. Technically, this is not vibrato, in spite of the name. Tremolo is a variation in loudness (which is what this is) while vibrato is a variation in pitch. Although they both have wooden bars, marimbas and xylophones have a different timbre. The xylo bars tend to be longer and more narrow for a given note, and the tuning emphasizes the harmonic a perfect fifth above the octave, giving a much sharper sound. The marimba, in contrast has a more mellow sound and extends deeper into the bass end of the spectrum. Xylophones are played typically with two mallets, marimbas with four, and vibes with either two or four (e.g., Gary Burton using four, Lionel Hampton using two). Four mallets facilitate a chordal style of playing while playing with two is geared more for rapid passages.

It should be noted that, unlike the children's toys sold as "xylophones" and the like, these instruments are large, heavy (200 to 300+ pounds) and cumbersome to transport. 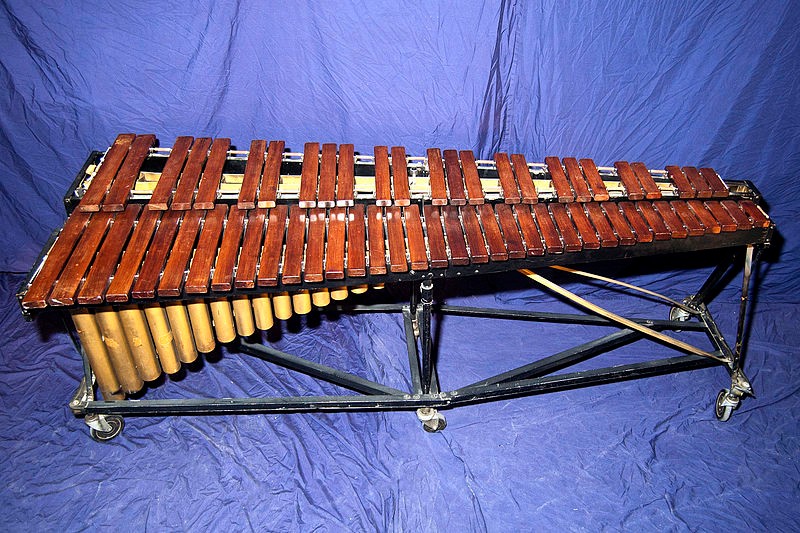 An extended range (five octave) xylophone. Five octaves is the typical range of a modern marimba.
Marimba bars tend to be a bit more "stubby" in appearance than these.
(Image via Wikipedia) 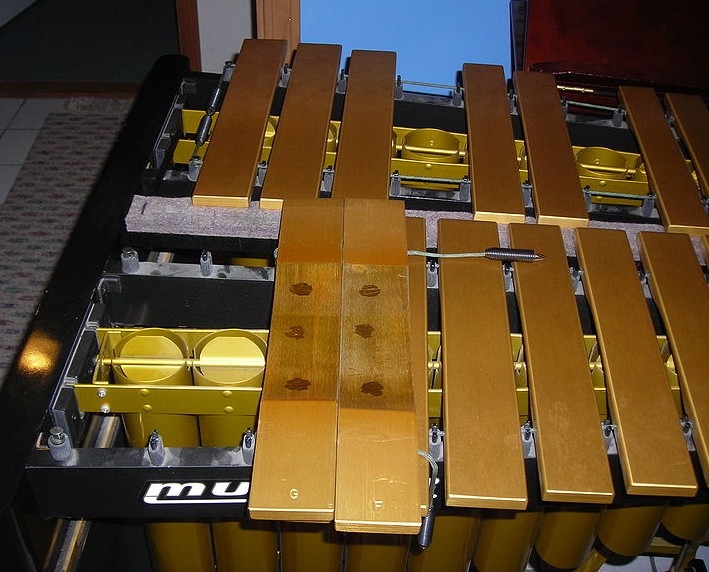 A vibraphone with the bottom two bars flipped over, showing the rotating vanes within the resonators.
Also note the gray felt damper running between the upper and lower sets of bars.
(Image via Wikipedia)

Contents of this site are copyright Jim Fiore, all rights reserved.